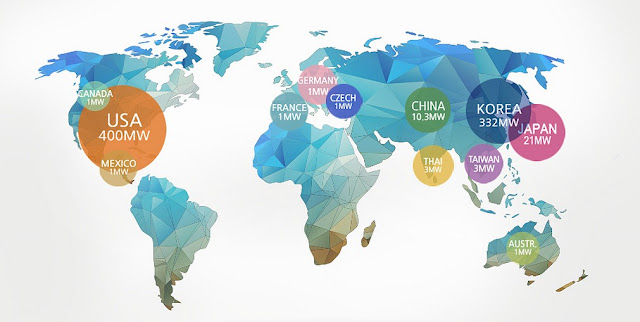 An outstanding solar PV energy company, PARU, has successfully installed
solar PV power plants, which is total 795 MW,
throughout the world including South Korea, USA, Japan, and 8 other countries. 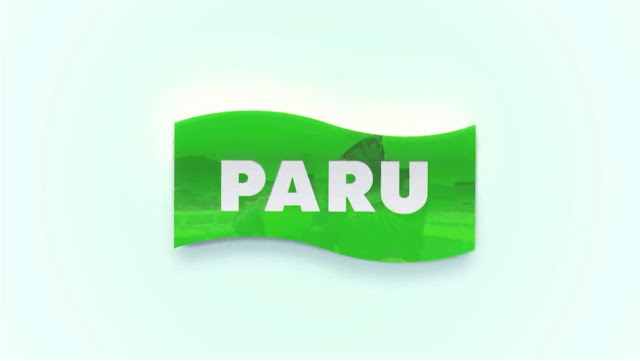 It is remarkable that
PARU has constructed total 511 solar power plants in South Korea.
(Some are structure supply.)
The total amount of their station capacity is 332 MW.


Today, we have a video clip to show you
the major installations of power plants under the PARU's construction.

Here is the video clip that shows the major installations of the power plants constructed by PARU. 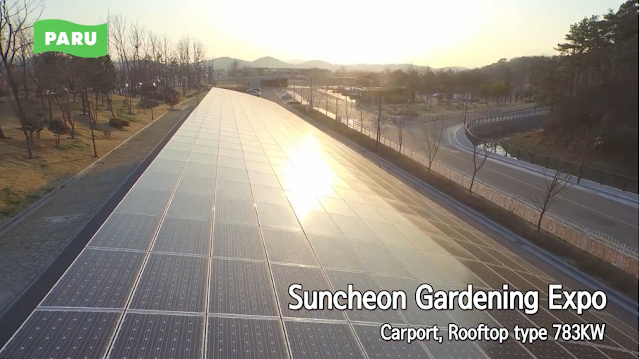 
Suncheon is a city in South Jeolla Province in Korea.
The International Garden Exposition was held here in 2013.

The average daily power consumption of the event was around 17,000kW
and 5000kW came from the solar power.

This 5000kW is the 32% of the total electricity consumption.
If the weather was sunny,
the solar PV electricity power share could have reached up to 39%! 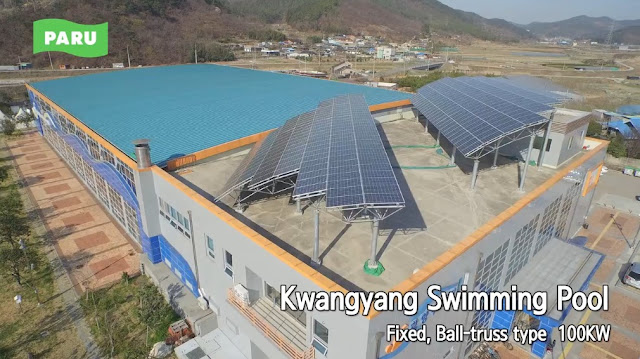 Kwangyang is a city in South Jeolla Province, South Korea.


South Jeolla province receives the most amount of irradiance in Korea
and it is 23% higher than that of Seoul.
For this reason, 40% of the domestic solar facility is installed in South Jeolla. 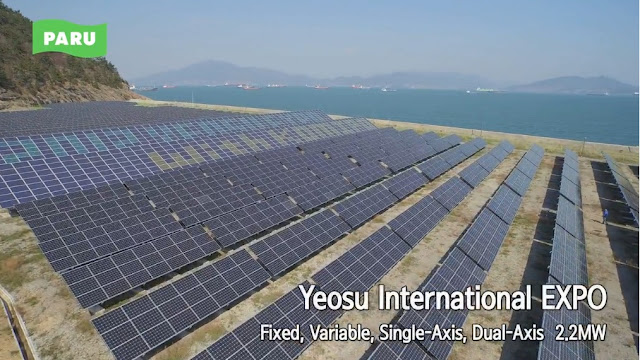 The Yeosu Expo solar PV plant, located in the Southern coast of Korea,
showed advanced Korean technology and the importance
of the pro-environmentalism to the international crowds.


The solar facility here was started to build on Dec, 2011 and completed 4 months later.
The facility covers around the 46,918㎡area and 9.2 billion has been invested.
Produced electricity from this facility was a part of the power source at the Expo.

The plant produces 7200kWh daily and 2,570,000kWh yearly
and this is enough to cover 700 households’ consumption of the electrical power.

Through the eco-friendly electricity production,
yearly about 1600 tons of greenhouse gas exhaustion can be reduced
(equivalent to planting 275 20 year old pine trees). 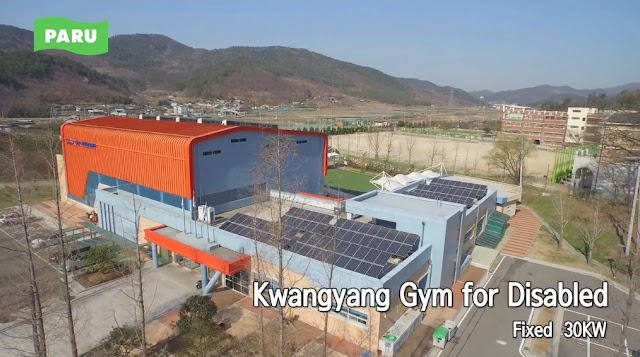 PARU’s business fields cover
from the environment technology to organism environment.
PARU always emphasizes the importance of environment and people.

Kwangyang Gym was one of the examples that show
how PARU's mission statement was fulfilled.

With this foundation, PARU will continue to develop
and grow to obtain a clean and green world
as a ‘Total Environment Special Corporation.’ 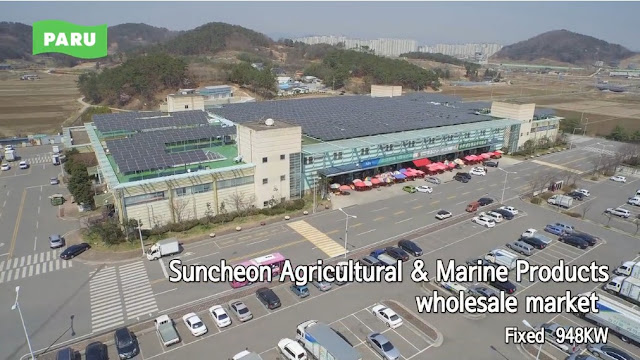 PARU's fixed types were constructed on the rooftop of the market.

Suncheon city has worked with PARU
in order to expand the use of renewable energy
at the Suncheon Agricultural & Marine Product Market
located in Heagwangro, Hearyongmeyon, Suncheon city. 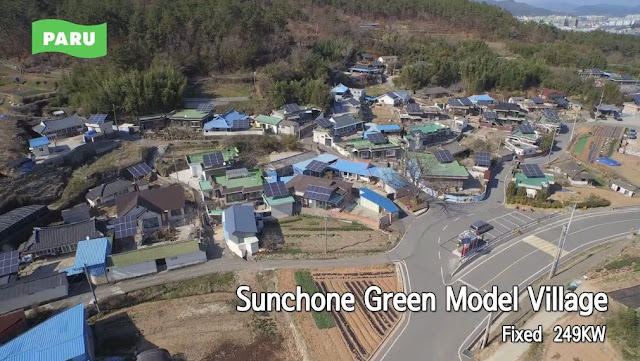 
This example explains that PARU aims for the high efficiency
and the enlargement through improving the previous product
and developing the key products. 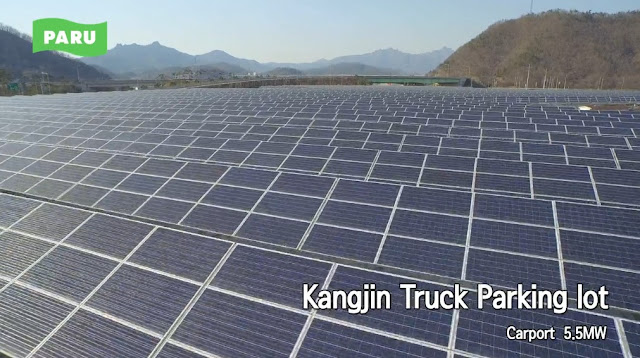 
Despite having the least fiscal self-reliance capability in Korea, with PARU,
KangjinGun completed a 5MWh capacity of solar structure at Public Cargo Vehicle Garage
to find a sustainable non-tax growth income for the Gun (A sub-district in Korean).

This garage covers an area of 146,975㎡ and 1300 large cargoes can be parked.
Up until the solar project started, this garage was not actively utilized.

As the solar structure installed, it is expected to create 0.1 billion Won revenue per year,
which is about 90,301.61 USD 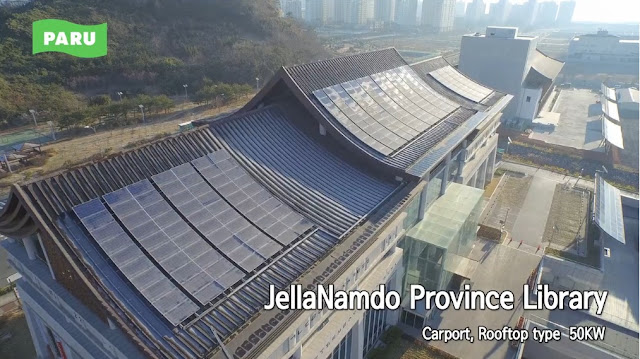 The library has a reference room, children’s info room, digital room
and also provides a resting place for the community.

In addition, by constructing a network that connects 286 libraries
(52 public libraries and 234 small village libraries)
in South Jeolla province, this library earned a good reputation. 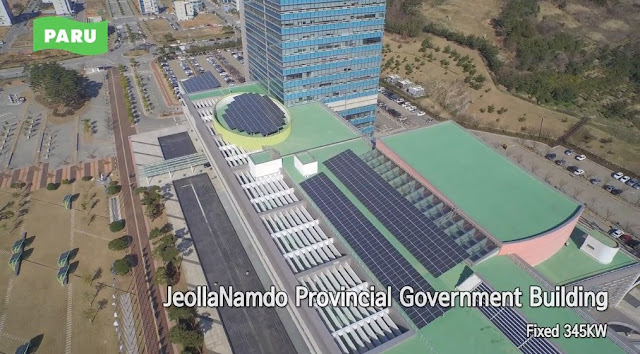 
PARU also analyzes the constantly changing surrounding environment and market status.
Through developing a system that is interworking with the solar system,
PARU seeks a cost reduction and a growth as a leading international solar energy company.


This power plant is also in South Jeolla Province, and it is built on a huge government building. 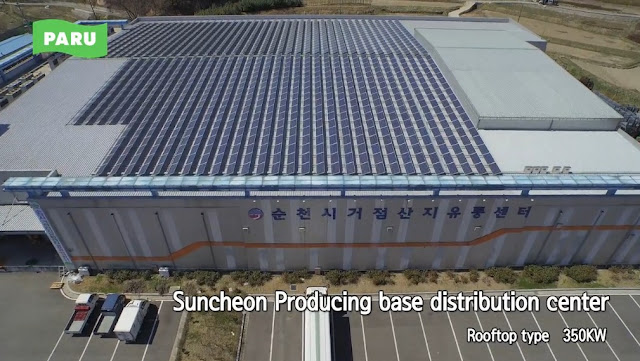 
The power plant built in Suncheon has rooftop types, which generates 350 KW. 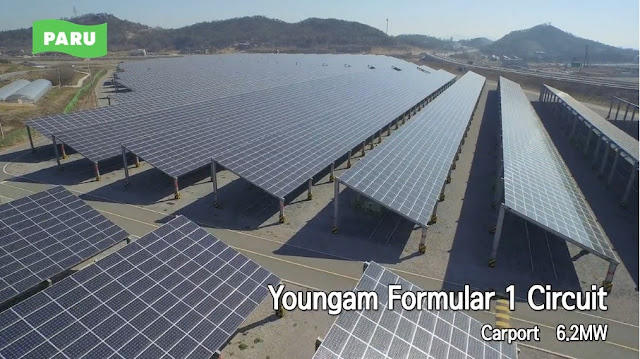 This plant is the biggest solar plant commercially operating
since the beginning of RPS (Renewable Portfolio Standard) by the government in 2012.

This solar plant yearly produces about 18,000MWh electricity
and provides it to 5000 households.